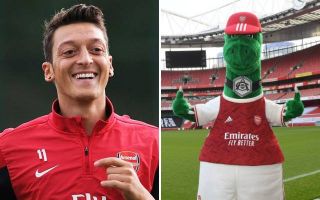 Mesut Ozil has revealed his delight on Twitter at the return of Arsenal mascot Gunnersaurus.

As reported by Sky Sports at the time, Gunnersaurus was one victim of Arsenal’s COVID-related flurry of redundancies, something that Ozil wasn’t prepared to stand by and allow to happen.

Ozil offered to pay for Gunnersaurus’ salary in hope of getting the dinosaur back to the club, where he belongs. Whether it was a PR stunt, or a genuine act of kindness, only he knows.

As he revealed yesterday, Gunnersaurus is now back, though who is paying his wages is at this point unclear. Ozil appears to be absolutely delighted with the news.

Here’s how the German responded to Gunnersaurus’ return.

Happy to see you back where you belong ??#YaGunnersYa https://t.co/6vffAervHI

How the mighty have fallen, eh?

Once upon a time, we were talking about Ozil being one of the best midfielders on the planet. Now if he’s mentioned in the mainstream media, it’s because of his interactions with a dinosaur.

What a strange year this is.