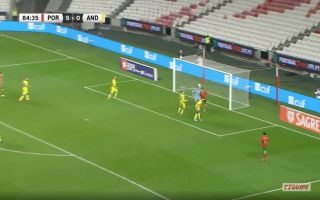 In the 84th minute of Portugal’s international friendly against Andorra, Cristiano Ronaldo got on the scoresheet to make it 6-0, with the one-sided tie eventually ended 7-0.

The five-time Ballon d’Or winner assisted Renato Sanches in the 55th minute of the encounter.

Back to the 84th though, after Ronaldo saw a shot blocked and saved, the ball was played out to Mario Rui, the left-back rolled the ball forward and floated a dangerous cross into the box.

Ronaldo was in between two Andorra defenders and used his trademark powerful leap to jump up and head the ball towards goal, the keeper got his hands to it but couldn’t keep it out of the net.

Pictures from beIN Sports and L’Equipe.

This was the perfect kind of matchup for Ronaldo and Co. to get themselves confident and in gear ahead of two Nations League fixtures, as they look to defend their trophy.