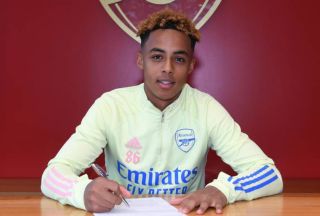 It’s a phenomenal achievement for any kid to reach a point where they sign a professional deal with their club, but it only marks the start of the hard work that comes with trying to break into the first team.

Omari Hutchison is a talented youngster who’s been doing well for Arsenal’s U18 side, and the club have just announced that he’s been rewarded for his sparkling form with a professional contract:

He’s clearly highly regarded by the club when you see the glowing write-up that he gets on their website. He’s described as a pacey winger who’s also known for his technical ability, and he’s been at the club since the age of 11.

He’s already established himself as a regular starter in the U18 side and he was even listed as part of the squad that would be eligible to play in the Europa League, so he could even be a name to watch out for if Arsenal have the group sewn up before the last game.

It’s likely that his main aim will be to force his way into the U23 side next, but you never really know how far away a player is from the first team these days.