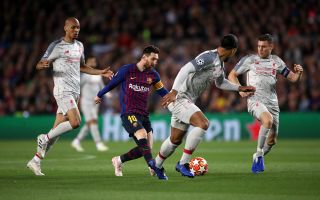 He may be the best player in the world of football, perhaps the best that has ever played the game, but that doesn’t necessarily give Lionel Messi a free-pass to be disrespectful to match officials.

According to MARCA, cited by Football Espana, a new documentary entitled Man in the Middle gives an up close and personal view of the conversations that officials often have with players during games.

One of the exchanges involves the Argentinian maestro and Bjorn Kuipers during the first leg of Barcelona’s Champions League semi-final against Liverpool in the 2018/19 campaign.

“Messi! Come on! Hurry up and show me respect, you always do the same! Come on now!,” Kuipers is quoted as saying by MARCA cited by Football Espana, as the teams came out for the second half.

It sounds like the documentary will give a fascinating insight into the behaviour of these elite footballers, and the tricks of the trade that they will try and get away with in order to give them even the smallest of advantages.

Mind games play a huge part in the modern game, and perhaps Messi knew exactly what he was doing whether or not he intended to disrespect the official.