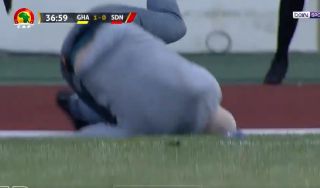 It’s unlikely that FIFA would sanction a law that allows referees to fight back after receiving one comment too many from a player or a coach on the field, but it could make the game much more entertaining.

These scenes were spotted in the game between Ghana and Sudan today, and it’s fair to say that the ref had simply had enough of Sudan’s coach Hubert Velud:

The referee was not having it Today in Sudan vs Ghana. from soccer

The moment Sudan coach Hubert Velud was pushed by an official ?pic.twitter.com/GTDRnoUSpe

It appears that Velud was given a yellow card for his part in this, but you have to think he ref has some questions to answer after this.