Spanish publication SPORT‘s front page today suggests that Neymar’s long-awaited return to Barcelona could materialise in the midst of the elections.

Neymar, who departed the Nou Camp back in 2017, has won three consecutive league titles with PSG, but is somewhat shackled by the fact that Ligue 1 is not considered to be one of the continents truly elite divisions.

At Barcelona, he was starring in one of the most competitive leagues on the planet, as well as having a legitimate shot at European glory season after season – something that he hasn’t managed to achieve with PSG, despite reaching the Champions League final last term.

Neymar could have to depart PSG if he wants to have any hope of winning the Ballon D’Or while still in his prime, and if SPORT’s frontpage today (Friday 13th) is anything to go by, a return to Barcelona may well be on the cards. 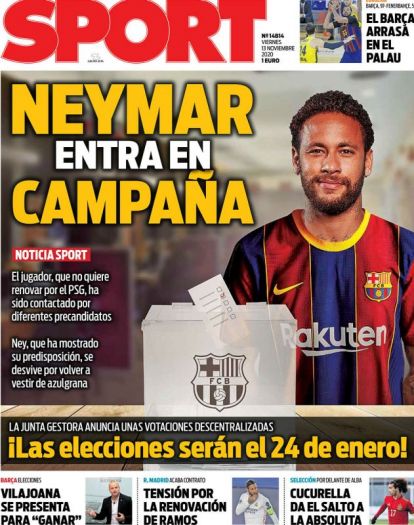 The digital frontpage is shared by SPORT on their website, where they claim that Neymar has no intention of extending his contract with PSG, with potential runners in the Barcelona presidential election already having made contact with him over a potential return.

As if often the case at the top Spanish clubs, presidential elections can be determined by who promises the arrival of who. If anyone can get Neymar’s seal of approval, and his commitment to returning to the Catalan giants, they might just be the man to replace Josep Maria Bartomeu.