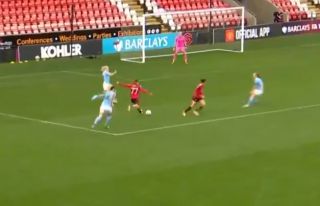 It’s always fascinating to look at some of the international stats in the women’s game because there does tend to be more fixtures and it means players can post hundreds of caps.

Tobin Heath is the perfect example after playing for the US 168 times since making her debut back in 2008, and she’s now playing for Man United in the FA WSL.

They were struggling in the derby after going 2-0 down against Man City, but Heath has just dragged them back into the game with a rocket after pouncing on a loose ball: