Arsenal defender Gabriel Magalhaes has revealed the true reasons behind why he opted to team-up with Mikel Arteta during the summer, admitting that he has always been a strong admirer of the Gunners having watched them on TV when he was younger.

Gabriel, 22, joined Arsenal from Ligue 1 side Lille in a transfer which cost the Gunners £23.4m, as per TransferMarkt.

Since joining Arsenal just a few months ago, Gabriel has emerged as one of England’s most impressive centre-backs.

The young Brazilian, who scored on his debut against Fulham has already featured in a total of nine matches in all competitions for Arteta and is quickly becoming one of the first names on his side’s team-sheet.

However, Gabriel’s arrival at the Emirates wasn’t always a certainty after a summer of speculation suggested he could have joined either Napoli or Manchester United instead, as per Sky Sports.

Speaking exclusively to Arsenal Player, as quoted by Evening Standard, Magalhaes has revealed why he chose Arsenal, he said: “I was trying not to hear too much about transfer speculation because you always end up thinking about everything that’s going on.

“After Arsenal came into the equation, he told me about other clubs that were interested, but I chose Arsenal because it was a dream for me. It’s a club that I really like and always watched on TV, with fantastic history.

“Arsenal is a huge club, one of the biggest in the world, and I told my agent from the start that if Arsenal came in for me, I wanted to wear the shirt, play at the stadium and feel the fans’ support because it’s a club I’ve always watched.

“I’m now very pleased to be here today alongside top players. It’s a childhood dream of mine.”

Gabriel is set to return to domestic action in the Premier League when his London club travel to Leeds United on November 22, the exciting match is scheduled to kick-off at 4.30pm UK time. 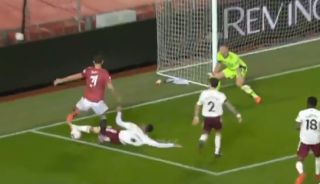 “By far the signing of the summer” – These fans absolutely purring over Arsenal star’s performance vs Man Utd November 2, 2020 14:30
Manchester United FC