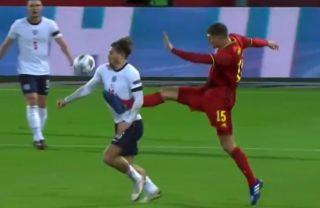 There was a feeling that Jack Grealish may have to leave Aston Villa if he wanted to get serious chances for England, but his performances this season and inclusion in recent games by Gareth Southgate has shown that wasn’t the case.

He looks perfectly at home at international level and he’s showing he has the class to leave some very good players looking foolish.

This little touch and turn against Belgium tonight was just a small example, but it’s still delightful to watch: