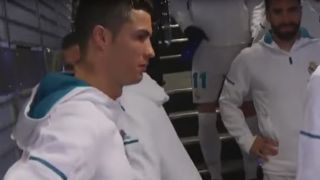 The Mirror have unearthed a video from back in 2018 when Ronaldo and Real were in the Bernabeu tunnel waiting to play a match against Valencia.

A mascot approached Ronaldo to speak of his admiration for him, though he made the mistake of also mentioning the Portuguese’s arch nemesis Messi.

MORE: The stat that proves Harry Kane is hitting Messi and Ronaldo levels for Tottenham

A video shows the mascot saying: “For me, you are the best player in the world, and Messi…”

Ronaldo then interrupted to add: “…is bad!” to the end of his sentence in what is being described as the ultimate ‘dad joke’.

The pair truly have been a joy to watch on the pitch for the last decade or so, and it’s extremely difficult to pick which of the two is the true GOAT (greatest of all time).

It seems clear, however, that Messi is often on Ronaldo’s mind, going from this exchange and others.

Ronaldo later spoke fondly of Messi, however, saying he’d like to have dinner with him at some point.

“I don’t know if that’s happened before – the same two guys on the same stage all the time.

“Of course, we have a good relationship. We haven’t had dinner together yet, but I hope in the future. We had that battle in Spain. I pushed him and he pushed me as well. So it’s good to be part of the history of football.”

Messi shared those sentiments, saying: “Yes, I don’t have any problem with that… We might not be friends because we’ve never shared a dressing room together but I always see him at award shows and there’s no problem.

“I don’t know if there will be a dinner because I don’t know if our paths will cross for obvious reasons, each one of us has our own life and our own commitments. But obviously I would accept the invitation.”