According to the Mirror, Didier Deschamps has admitted to TF1 that Anthony Martial ‘lacked in finishing’ for France in their win against Portugal, but reiterated that the forward was ‘very promising’.

Deschamps added that he initially thought that Martial looked ‘clumsy’ after quite a few missed opportunities in the match, but later realised that they came down to ‘small margins’.

Martial couldn’t hit the back of the net after a lovely pass from United teammate Paul Pogba, saw a goal denied by some point-blank heroics from Patricio and also hit the bar after a jaw-dropping team move.

Here’s what Deschamps had to say on Martial’s performance and his overall development:

“He lacked in finishing – it seemed a little bit clumsy, but sincerely, having watched the moments again, it came down to small margins.”

“He is part of the group of players who have not been here for a long period of time, but he has changed during this period, on the pitch and off of it.”

“With years, he has also gained maturity. He is much more determined – he already had quality. Things are more concrete.”

“I feel a bit unfortunate for him because he was not rewarded with a goal, but he is very promising.”

Martial is still waiting for his first goal for the French national team (second overall) since he returned to the squad in September after a two-and-half-year hiatus.

The 24-year-old is yet to score in the Premier League for Ole Gunnar Solskjaer’s side this season, but has looked very sharp for the Red Devils in the Champions League with two goals and two assists.

Martial has the perfect chance to bag his first league goal of the season next time out with a favourable tie against relegation candidates West Brom.

United will be expected to record their first home win in the Premier League this season at the fifth time of asking when they face off against the struggling Baggies. 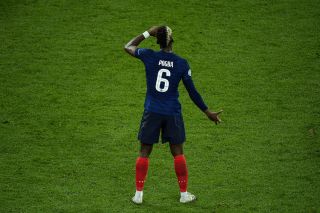