Arsenal midfielder Mesut Ozil has (un)helpfully offered his suggestion after Germany’s 6-0 defeat to Spain in the Nations League.

Ozil played a significant role in Germany’s World Cup win back in 2014, but has been out of the fold of late after falling out of favour at the Emirates.

It’s hard to imagine he could’ve done much to help on Tuesday evening, as Germany were defeated 6-0 by Spain in what was their heaviest competitive defeat of all-time.

While Ozil himself may not have had much of an impact on the score line, he believes that one of his fellow World Cup winners from six years ago could have done.

Jerome Boateng is one of the best of his generation, so drafting his quality and experience back into the starting line-up perhaps wouldn’t be such a bad idea.

Although, since when was Ozil a managerial mastermind?

There’ll be hundreds of suggestions flooding in as to how Germany can turn their fortunes around. You wouldn’t exactly feel inclined to look to Ozil for a solution, would you?+ 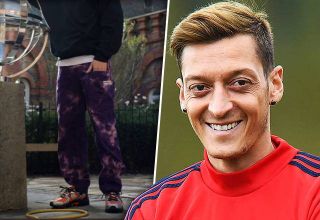 Mesut Ozil’s latest non-football venture involves some of most rascal trousers you will ever see November 12, 2020 14:52
Arsenal FC