Every top level player has a game which makes the general footballing world sit up and take notice, and that moment came tonight for Ferran Torres after he scored a brilliant hat trick for Spain against Germany.

He’s shown some flashes of brilliance for Spain and Man City so far in his career but you still got the impression he was settling in, so this can be considered as a true breakout performance.

His first of the evening looks like an easy tap in on paper, but he leaves nothing to chance as he powers a brilliant effort back across the keeper to make it 2-0:

His second goal was Spain’s fourth as they effectively ended any chance for Germany to come back, and again he shows some nice composure at the far post to ensure the keeper has no chance:

From the goalkeeper to the back of the net, Torres finishes off a devastating counter-attack!

The hat-trick goal was the pick of the bunch as he needs to generate power and shape on the shot with a defender closing in, but his shot is perfect and nobody is saving that:

Torres grabs his hat-trick after curling a fantastic finish into the bottom corner! ?

He had a few seasons at Valencia so it does feel like he should be older than 20, but it’s clear that City have another supreme talent on their hands here. 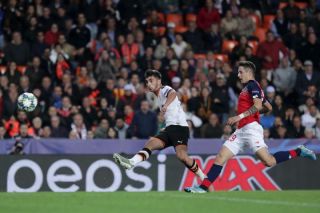