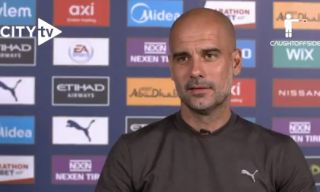 Manchester City manager Pep Guardiola has sent a message to the club’s fans after signing a new contract today.

The Spanish tactician’s new deal running to 2023 was announced this morning in what is undoubtedly a huge boost for City.

See the video above as Guardiola makes it clear how happy he is at the Etihad Stadium and how he feels he is in the right place to enjoy more success.

City have been dominant since Guardiola took over as manager, winning two Premier League titles – one on a record points total and one as part of a domestic treble.