The modern day football fan is used to having every angle of every game available at their fingertips, so it’s natural that any slight controversy will be analysed to death and blown out of proportion.

It means that the current crop of referees will come under far more scrutiny than those of yesteryear, but it’s still clear that standards have declined over the years.

I had the pleasure of working with many top class referees like Jack Taylor, Pat Partridge, George Courtney, Graham Poll, Howard Webb, Mark Clattenburg, Paul Durkin and  Mark Halsey to name a few.

When I was in charge of PGMOL I had to select ten referees from a group of eighteen for each round of games, but they would deliver top class performances on a consistent basis.

Each and every one managed to bring personality and flair to their officiating with Jack Taylor providing the perfect example. Off the field he was a quiet and unassuming guy, but when he crossed the white line he became a commanding figure who was respected by the players.

The Premier League has come a long way since the days of three TV cameras and a selection of highlights on Match of the Day, while the abolition of the pass-back law means referees need to be fitter and far more mobile.

Technology has advanced to the point where each game will have at least 22 cameras in operation, so it means the referees are operating under a forensic view every weekend where fans can see every angle of every incident.

With a switch of a button the TV editor can give us a view of an incident that’s not available to the match officials, so it’s about time we started using this technology to help the referees with their decision making.

A referee can only make a decision if he actually sees the incident, so we need to be certain that VAR is being used to benefit the game. I believe that football can learn lessons from how VAR is operated in Rugby.

The review process and examination should be available for fans inside the stadium and for those watching at home. Let’s all see the incident on the big screen, give us the opportunity to listen in to the review between the ref and VAR, and then they can make a decision. 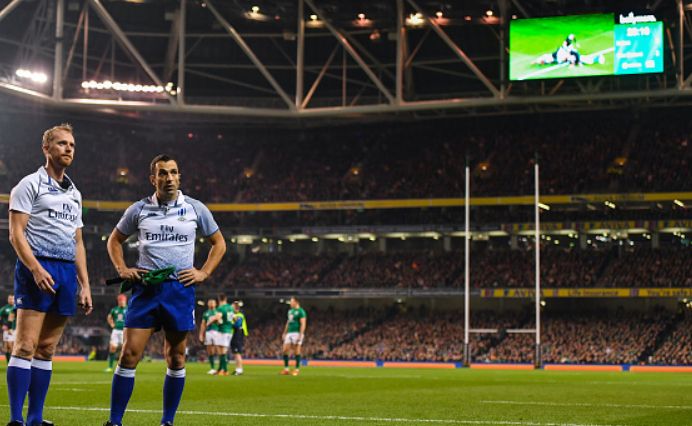 Admittedly this might be an issue in some grounds where there’s no obvious place for the instillation of screens. That doesn’t mean the audio can’t be played for everyone to hear, while a lot of teams are developing the Wi-Fi within their grounds so perhaps the technology can advance to a point where fans can watch the reviews via a smartphone app for example.

The problems with refereeing aren’t simply confined to the use of technology in the game as there is a general view that the standard of English Premier League referees is falling.

I believe that we do have some quality officials in Michael Oliver, Anthony Taylor, Martin Atkinson and Mike Dean, while several in the group do have potential but they are failing to deliver top quality performances.

One of the most noticeable things about referees like Webb, Clattenburg and Courtney was their ability to immediately pick up the pace of the game and keep up with it for the entire 90 minutes.

They possessed a dynamic sprint that ensured that a surprise move by a player or an accurate pass did not place them in a position where they were detached from play.

Sadly that’s not as prevalent in the current group and some of these referees need to be informed of this shortfall in their performances.

The first thing I would do to help this lack of consistency is to bring in coaches and former top class FIFA referees from other countries to help. We also need to re-introduce 100% assessment with a strong de-brief post match.

There’s a lack of accountability just now and PGMOL need to be brave enough to take a referee out of the firing line and offer them appropriate operational advice when it’s needed.

Similarly they shouldn’t be afraid to drop an official to a lower level to allow them to regain their form and confidence.

The Premier League is the best league in the world and it attracts the best players, so PGMOL should widen their view on recruitment and look to bring in some of the best referees in the world.

They have a budget of £21m so they can afford to do this. Our best referees also deserve better coaching, so the likes of Graham Poll, Mark Halsey and others should be brought back.

They can coach during the week and sit in the VAR chair at the weekends. We need to take active officials out of VAR roles and use former referees instead. It would also make sense to bring back some of the outstanding assistant referees to operate the offside decisions on VAR too.

I am calling for a change if we are to stop the current decline in standards of our officials – the board of PGMOL need to take positive action.