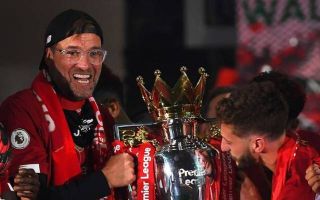 Liverpool manager Jurgen Klopp has revealed that he ‘couldn’t care less’ about the Premier League title at this point in time, as reported by the Daily Mail.

The Reds won the title at a canter last time, despite a slight wobble after the Premier League resumed post-lockdown.

Liverpool were far and away the best team in the league last term, with Manchester City failing to live up to what they produced in the seasons before under Pep Guardiola.

Despite a flurry of injuries, Liverpool still have to be considered the favourites to win the league again this term – but Klopp is not thinking about that at this point in time.

MORE: Jurgen Klopp opens up on Joe Gomez’s knee injury and ‘absolutely’ knows why it happened

When quizzed by Jamie Redknapp for the Daily Mail in regards to a potential title-winning points tally for the current campaign, Klopp is quoted saying:

“Sorry to say this but I couldn’t care less in this moment, Jamie. It doesn’t look like somebody will get 100 or whatever. In this season? Four weeks shorter? Same amount of games? I don’t think it’s possible. Even 87 looks far away.”

Considering Klopp has lost Virgil Van Dijk, Joe Gomez and Trent Alexander-Arnold to injury in recent weeks, May must feel like a long way away right now.

It’s no surprise to hear that he ‘couldn’t care less’ about the title or the manner in which it could be won.