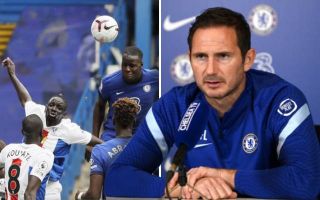 Frank Lampard is ready to make training changes as evidence grows of the link between football and dementia, as reported by Goal.

The BBC report that the PFA will be setting up a taskforce to investigate and support as the link between heading a ball and developing dementia later in life strengthens.

As mentioned in the article, World Cup hero Sir Geoff Hurst supports the PFA in doing so, with several of his world champion teammates being diagnosed with the disease.

Chelsea manager Frank Lampard is not willing to brush all the evidence under the carpet and continue as normal. He’s quoted by Goal revealing that he is already considering making changes at Cobham:

“The rules need to be stronger to make sure we’re not making younger children head it if they don’t need to. In the development game, that’s more than possible.”

“We have to start with youth football. When children are developing, we can control the levels of training. Anything we can do to make things safer, we should.”

“I think we can work up the pyramid. Already, I’m certainly considering it in terms of how we train here because of the seriousness of the issue.”

“At the professional level, the small gains are huge and we need to make sure we’re working under the same guidelines and trust each other that we are. At the moment, there are no guidelines. It has to be something that goes across the board.”

And fair play to him, too.

With there already being indisputable evidence of the relationship between heading a football and dementia, there is no time to waste in ensuring that players, especially young ones, are protected as much as possible.

Lampard deserves a huge amount of credit for his willingness to be one of the first at the top level to take action.