Manchester City’s attacking figures in their opening seven Premier League fixtures are good news for Liverpool and the other title contenders.

Since the turn of the previous decade, and Sir Alex Ferguson’s retirement, City have been the team to beat in the Premier League. If you finished ahead of them, the chances are you’d be on the top of the pile.

After two consecutive Premier League title wins, Liverpool were successful in dethroning Man City last time around, much to the delight of Jurgen Klopp.

MORE: Video: ‘Just between Mo and me’ – Klopp refuses to admonish Liverpool star in public

The German ought to be handed a great deal of encouragement about the Reds’ prospects this season as well, with City’s start to the season, in an attacking sense, being the worst for ten years. (image via u/tennerapp) 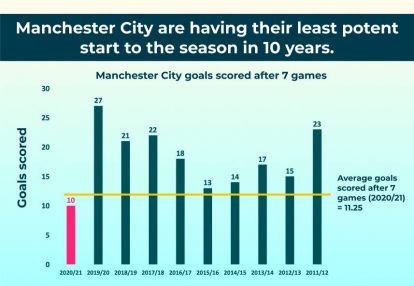 Pep Guardiola’s new contract may well give Man City a lift, with the Spaniard ending speculation over his future, but there’s been no clarification over City’s capability to contend this season.

Even with Sergio Aguero and Gabriel Jesus having struggled with injuries, they’ve looked completely ineffective in attack. It’s good news for Liverpool, and anyone else hoping to win the league this term.