England’s friendly with the Republic of Ireland should just have gone down in the annals of football history as a routine win for the Three Lions.

Unfortunately, the aftermath has uncovered something a little more sinister, described as ‘propaganda’ according to one source quoted by the Daily Mail.

It appears that in an attempt to motivate his players, Republic of Ireland manager, Stephen Kenny, decided that it would be a good motivational tool to show an ‘anti-English’ video.

With the FAI already looking into the issue, per the Daily Mail, Kenny should be rightfully fearful of losing a job he was only appointed to in April.

As the days have passed, more details have emerged to counter the argument that the video was in fact ‘pro Irish’ rather than anti-English.

The Daily Mail note how shocked some of the Republic players were when footage of the 1916 Proclamation of Independence, the Easter Rising and the Great Famine was shown, including a clip at the end which is reported to have been a mock-up of ‘1916’ on the scoreboard at Wembley.

It’s hard to see how Kenny survives this, even if his intentions were honourable rather than political. 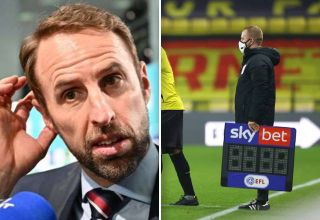