Ramos’ Real Madrid contract expires in the summer of 2021, which as you would expect, has shone the spotlight on his future at the Santiago Bernabeu.

While there’s every possibility he could extend his contract with the club where he has enjoyed so much success, he is also just over a month away from being able to pen a pre-contract agreement with any interested parties.

It’s certain that there’ll be a fair few potential suitors for a player of his quality, but it doesn’t look as though Liverpool will be one of them.

While the Reds are in dire need of centre-back reinforcements, The Athletic’s James Pearce has taken to Twitter to dismiss the idea that Jurgen Klopp is in the race to sign Ramos. 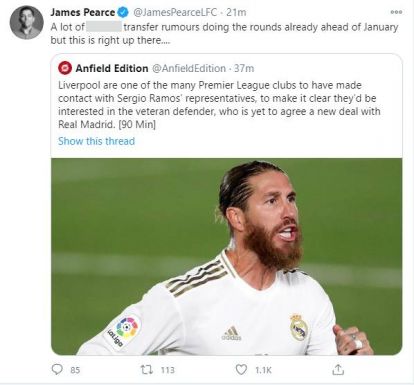 With Virgil Van Dijk and Joe Gomez out long-term, a centre-back will undoubtedly be on Klopp’s shopping list. Ramos doesn’t really fit the Liverpool mould, though. Especially after THAT incident with Mohamed Salah.