As reported by Neogol, Cristiano Ronaldo moved up in the all-time goalscoring rankings with a brace for Juventus against Cagliari this evening.

Ronaldo, who was forced to spend a period of the season so far on the side-lines after contracting coronavirus, has bounced back in some style since returning to action.

The Portuguese forward continued his fine form for Juve with a brace against Cagliari in Serie A tonight, the first of which was absolutely vintage Ronaldo.

It was a significant one, too. As Neogol report, his first goal of the game tonight saw him pass Ferenc Puskas’ tally of 746 career goals, with Ronaldo now having scored 748.

Neogol report that he still trails Romario, 750 and the legendary Pele, 767, but you have to think that the 35-year-old will be able to pass both of those tallies before the end of the season.

Matching and surpassing Pele’s all-time goal tally would be quite the feat. Though, Cristiano is without a World Cup, as we’re sure Pele would be quick to remind you.

Ronaldo is one of the greatest ever to grace the game, and the figures prove it. Let’s lay the Lionel Messi comparisons to bed and just appreciate what a phenomenal player he is. 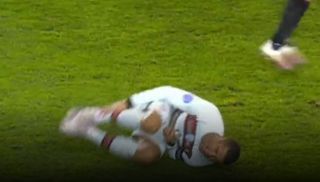