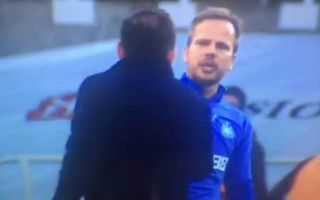 Frank Lampard was caught by the cameras embracing Stephen Clemence, son of the late Ray Clemence, before Chelsea’s clash with Newcastle United this afternoon.

Ray Clemence, one of the greatest goalkeepers in the history of English football, tragically passed away at the age of 72 at the tail end of last week.

His legacy; success at Liverpool and Tottenham as a player and with the England National Team both in a playing and coaching capacity.

MORE: ‘One step ahead’ – These Chelsea fans left purring by another superb showing from summer signing

His death is a huge loss for the English game, as Chelsea manager Frank Lampard would no doubt acknowledge.

Ahead of today’s clash between the Blues and Newcastle, Lampard was caught on camera giving a warm embrace to Clemence’s son at St. James’ Park.

Stephen Clemence, formerly of Tottenham, Birmingham and Leicester, works as a coach under Steve Bruce’s stewardship at Newcastle.

It will have been an unimaginably difficult week for him and his family, so it’s a nice moment to see Lampard pay his respects in this manner.