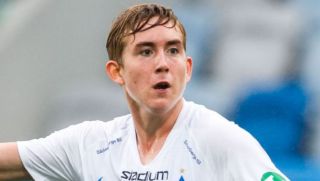 Fans of Football Manager will know that Brexit has been ruining saves in the UK for a couple of years now, but it finally looks like we’re about to see the impacts in real life when it comes to transfers.

ESPN have indicated that Man United and Juventus are trailing Icelandic wonderkid Isak Bergmann Johannesson who currently plays for Norrkoping in Sweden.

The 17 year old midfielder has already made his debut for Iceland and he’s a regular starter for his club with three goals and nine assists in twenty five appearances this season.

It’s suggested that United are ready to pay the £5m asking price, but it’s believed that Brexit will limit UK clubs from signing foreign youngsters who are under the age of 18, so they would have to wait until the summer.

READ MORE: Man United’s historic rivals Leeds named as side that could loan star in January

They go on to point out that this gives Juve the advantage of being able to sign him straight away, so they are now in pole position to sign him.

This story does have an extra twist because the player was actually born in Sutton Coldfield in England, but he’s listed as Icelandic everywhere and obviously plays for their national team.

It’s not clear if he has dual-citizenship due to the country of his birth so that could negate the Brexit problem for United, so it could be a case of waiting to see what happens with any arrangements and dual passports.