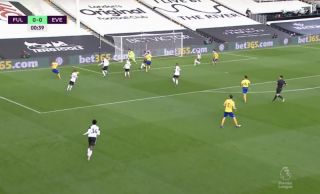 Everton have got off a flyer against Fulham in today’s early Premier League kick-off after Toffee’s striker Dominic Calvert-Lewin opened the scoring after just 40-seconds.

READ MORE: Olivier Giroud hints at Chelsea exit ahead of next year’s Euros

Calvert-Lewin, 23, has continued his impressive form for Everton after an early goal-line finish as fired his Merseyside into the lead.

Everton’s Englishman has already scored eight goals in eight appearances in the Premier League this season with today’s heroics set to keep him at the top of the league’s scoring charts.