As depicted by this Transfermarkt graphic, AC Milan have been the team to beat in Italy post-lockdown. Juventus, not so much.

Milan, one of the biggest clubs on the planet, who have endured a difficult decade, sit top of Serie A, largely thanks to the electric form of striker Zlatan Ibrahimovic.

39-years-old he may be, Ibrahimovic has already hit double figures in Serie A this term, having played just six games, with the Swede being forced into self-isolation after contracting coronavirus.

MORE: “Somebody is making profit on my name” – Zlatan Ibrahimovic takes aim at FIFA in furious Twitter rant

Milan, and Ibrahimovic, are flying, and that’s shown by this graphic produced by Transfermarkt, which tallies up the league table post-lockdown. As you’ll see below, Milan are eight points clear of nearest challengers Roma. 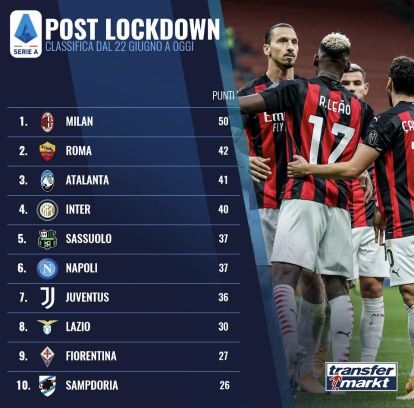 It won’t make for fond reading for Juventus fans, who may well be the reigning Serie A champions, but have clearly not been at the top of their game since lockdown came to an end and the season restarted.

Even if Cristiano Ronaldo too has been on fire. Eight goals in five games, with a period of isolation of his own, has only been enough to steer Juve to fourth. Improvement is needed if they want to pip Milan to the post.