Former Manchester United midfielder Luke Chadwick has explained why the superb form of Bruno Fernandes is both a positive and a negative for manager Ole Gunnar Solskjaer.

Fernandes has got off to a superb start to life at Old Trafford since his move from Sporting Lisbon last January, quickly becoming one of United’s most important and influential players.

MORE: Man United rival Arsenal for transfer of unsettled star who admits “this isn’t what I dreamed of”

It’s clear the Portugal international is the kind of player a manager would want to build a team around, but Chadwick has pointed out that it might be coming at the expense of a better all-round system for the Red Devils, whilst also putting pressure on him to always be the one performing.

At the moment, Fernandes tends to play in a number ten role with plenty of freedom given to him by the defensive midfielders behind him, but Chadwick told CaughtOffside that this has generally left the team a little short of creativity in other areas.

“It’s just about getting that balance right … Ole has tried getting more creative players in the team, particularly Pogba in that position,” Chadwick said.

“But without the two holding players, which they’ve had more success with, be that Fred, McTominay or Matic, they’ve looked more solid in terms of results.

“But at the same time the creativity isn’t there. Bruno is so important to the team – his record speaks for itself in terms of goals and assists, so it seems a case of getting the best out of him, and playing the two defensive players gives him license to roam. But it doesn’t make the team more creative and puts more pressure on Fernandes to deliver.”

Chadwick added that United’s struggles to open teams up at home might also be down to relying on the pace of their forwards such as Marcus Rashford and Anthony Martial.

This doesn’t work as well in home games as visiting teams will tend to come to Old Trafford and defend deep, and Solskjaer’s side seem to lack much in the way of a Plan B. 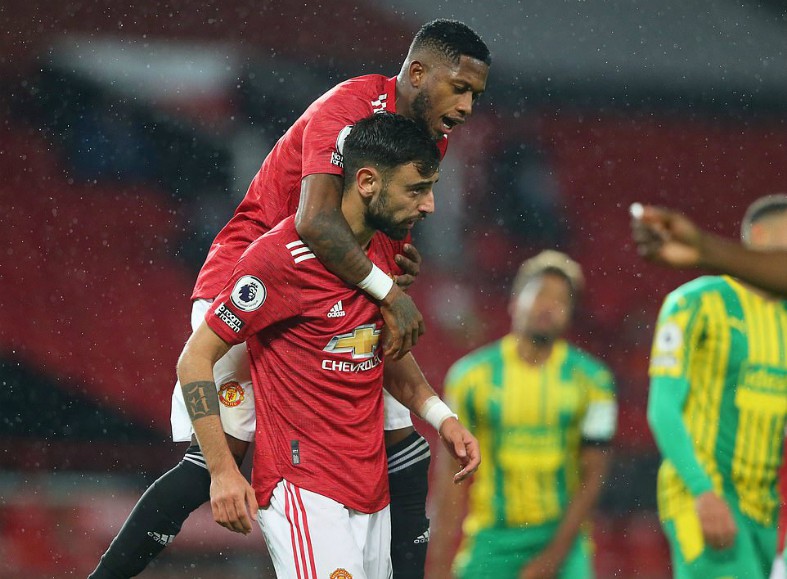 Bruno Fernandes has been a huge performer for Manchester United

“Every game at Old Trafford has been quite flat this season,” Chadwick said. “It was great to get another win to build on the result at Goodison Park, but it was quite an uninspiring performance.

“There’s a lack of creativity in the home games, they’re finding it hard to break teams down because they tend to sit a little deeper so they can’t find the space behind, which is where United’s main threat lies with the pace of Rashford and Martial.

“Both of them found it hard to affect the game. It’s been a bit of a slog but to get that second win on the spin is vitally important for Ole and the team to keep moving forward.”