Some Arsenal supporters believe that highly-rated youngster Folarin Balogun is ‘leaving’ next summer after the 19-year-old’s apparently cryptic tweet.

Balogun took to social media to share a picture of his debut once more with the caption ‘a moment I’ll never forget!’ – with the tweet accompanied by the praying hands emoji.

This was posted hours after the Athletic (subscription required) reported on Monday that the Gunners reopened talks with Balogun over a new deal.

It’s stated that Brentford offered £5m for the forward in January, whilst Premier League side Sheffield United also had a bid rejected.

The Athletic actually expected the talent to be sold in the summer transfer window due to the wide interest in his services, but a deal never came to fruition and he could now leave for a compensation fee. 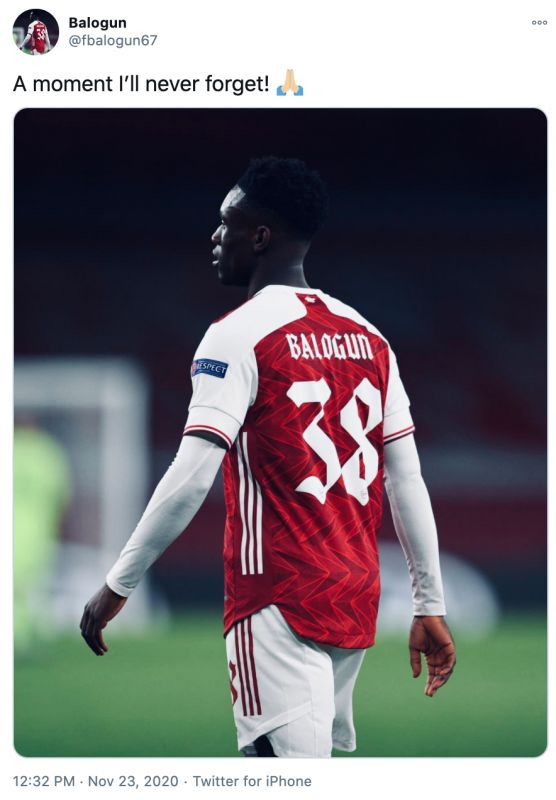 Here’s how some Arsenal fans have reacted to the tweet:

You’re leaving us man
Ain’t you???

I know Ornestin said they reopened talks but This is so cryptic and can also mean he is sadly leaving..

Doesn’t mean he will accept our offer. Especially with that kind of words he said on this tweet. So, he’s probably leaving then.

Balogun of course shared a post at the actual time of his debut as well, with the ace coming off the bench in the Europa League win against Dundalk.

That’s what makes this tweet somewhat strange, it hasn’t been a full month so it’s not exactly an anniversary post of sorts – it seems far too coincidental that Balogun shared this with a new caption at the same time that his name made the headlines of the Athletic.

If Arsenal have just reopened talks with the 19-year-old, they’ve left themselves little time to negotiate terms as the exciting prospect is free to officially discuss a pre-contract agreement with foreign clubs from January.

The talent’s international allegiance appears to be with England as he’s netted far more youth caps than the few he received with the USA’s Under-18s during a brief switch – Balogun was born in New York.

With the path to regular first-team action seemingly blocked, a move may be the best option to kickstart Balogun’s professional career.

‘Balogun is gone for sure’ – These Arsenal fans say ‘bye’ to starlet Folarin Balogun after contract rebel’s omission vs Newcastle January 9, 2021 17:11
Arsenal FC

Report suggests Arsenal only have themselves to blame if talented youngster leaves for nothing January 7, 2021 14:29
Arsenal FC