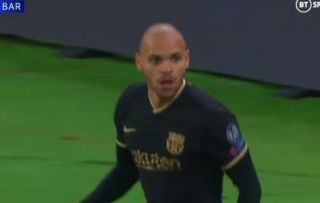 The number 9 shirt at Barcelona really does read like a who’s who of the greatest strikers in recent years – Ronaldo, Samuel Eto’o, Zlatan Ibrahimovic, Luis Suarez and well….. Martin Braithwaite.

It’s hard not to sound disrespectful towards the Danish striker but he’s clearly not in the same group as those other names, so seeing him take the 9 shirt this season isn’t one for the purists.

At least he did manage to get on the scoresheet tonight to make it 2-0, but even he looks a bit surprised that he’s just scored for Barcelona in the Champions League…