Every team needs a player who tends to play on the edge because it can drive everyone else on, but it can also cause some serious problems if they don’t learn how to control that temper.

Inter Milan had a golden chance to beat a depleted Real Madrid team tonight but they find themselves a goal and a man down at the break.

Arturo Vidal managed to earn himself two yellow cards in quick succession by losing it with the referee and refusing to shut up, so there’s a huge chance that he’s just ensured his team is knocked out of the Champions League.

A loss here would leave Inter five points adrift with only two games left so Antonio Conte will be furious, but he can’t be totally shocked at this.

Zlatan Ibrahimovic and Patrick Vieira were the only two players in Champions League history who had been sent off for three different teams…. until tonight:

3 – Arturo Vidal is one of three players to have been sent off for three different clubs in the Champions League (Inter, Bayern Munich and Barcelona), along with Patrick Vieira and Zlatan Ibrahimovic. Serial. pic.twitter.com/UQj7GIOonB

Vidal’s energy and desire has always been a huge part of what made him a successful player, but it’s also contributed to his downfall tonight. 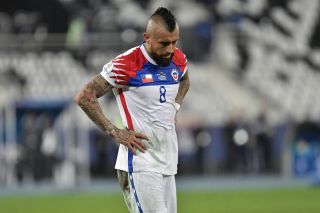