These are a mix of iconic footballing moments produced by a great of the game, as well as pure ridiculousness that encapsulated what a truly unique character he was. 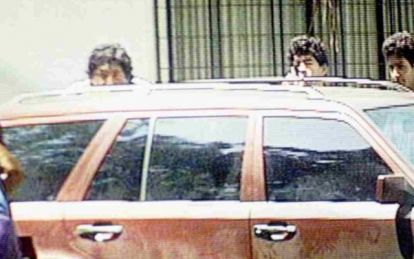 As the story goes, (and is told by Goal) reporters were camped outside Maradona’s house in the build-up to the 1994 World Cup. He clearly didn’t take kindly to the fact that they were invading his privacy in this manner.

Maradona came out of his house with an air rifle and opened fire on reporters, with some of them picking up minor injuries, per Goal’s report.

This is one of those moments of ‘pure ridiculousness’ we referred to previously.

That’s what made him such an intriguing character to monitor, as these reporters in the story were doing, and which is what saw them have air rifle pellets fly in their direction.

It’s easy to forget, with his performances as a player being those that wrote his name into the history books, but Maradona also managed Argentina during the years of 2008 and 2010.

While he is far from the most successful Argentine manager in history, Maradona did produce one of the most memorable moments produced by one.

With just two World Cup qualifiers remaining in Argentina’s efforts to reach the 2010 edition of the competition, the Maradona led Argentines conceded an 89th minute equaliser against Peru.

While it looked as though they were down and out, with their qualification hopes hanging by a thread, Martin Palermo headed home in injury time to secure his country all three points.

Maradona went absolutely loopy, diving into a puddle on the heavily waterlogged turf.

It summed up both his passion for his country and his boisterous character, two things which he was renown for.

Unfortunately for Maradona and Argentina, a 4-0 defeat to Germany see them go out of the 2010 World Cup at the quarter-final stage. There was to be no dream Lionel Messi and Maradona hand-in-hand triumph.

3.) The celebration. The eyes.

Anyone who knows of Maradona will have seen a screengrab of this celebration at some point, no doubt.

Though he was at the tail end of his prime, with his physical condition in a right state, Maradona managed to get himself ready to compete in the 1994 World Cup with Argentina.

Proving that class is permanent, he scored an absolute peach against Greece.

A great goal it may have been, it didn’t prove to be nearly as iconic as the celebration. The eyes.

We would never go as far as suggesting that Maradona touched a hard drug in his life, but you could be forgiven for thinking he had with the state of his eyes there.

It was vintage Maradona. A great goal and a truly bizarre celebration to match. A phenom, but a character all the same. One of a kind.

We couldn’t write a top five best Maradona moments without including THAT goal against England. No, not that one. We’re talking about his mazy solo run and finish at the 1986 Mexico World Cup.

Maradona began with the ball in his own half, weaved in and out of the England defenders before taking it past Peter Shilton and finding the back of the net.

It’s widely considered one of the best goals of all-time, and is definitely one of the most iconic, with a World Cup quarter-final certainly not being a bad time to pull that out of the bag.

Argentina went on to win the competition, so at least England could say that they had their pants pulled down by the victors, although, there was only one victor on that day, and his name was Diego.

‘The hand of God’ as it is commonly referred to. Maradona beat Peter Shilton to the punch at the 1986 World Cup and jabbed the ball into the back of the net.

It was one of the most unsportsmanlike, controversial, completely and utterly brilliant moments in World Cup history.

The way that Maradona didn’t even flinch at wheeling away in celebration, even with the entire England backline desperately protesting to the referee.

It’s been viewed over 10 million times on YouTube, which is testament to the fact that a moment that happened 34 years ago will be forever engrained into football folklore.

It’s worth one more watch, even if you are English, just as one final appreciation of Maradona’s twisted brilliance.

And an honourable mention…