If Arsenal weren’t disappointed enough with their 0-0 draw at Elland Road at the weekend, the conduct of Nicolas Pepe put a real dampener on things.

In truth, it wasn’t the best Arsenal performance against Leeds, but their task was made even more difficult after the Frenchman aimed a ridiculous headbutt at Ezgjan Alioski.

The notion that Alioski made a meal of it is to take away from the seriousness of the offence, and it’s one which former Gunner, Ian Wright, believes should see the book thrown at Pepe for.

“It was one of those games where it didn’t really happen for Pepe,” he said on DAZN, cited by the Daily Mirror.

“Alioski had his number and then there you go that’s it, he’s cracked. You’re not talking about a massive headbutt but you just can’t do that.

“Judging by his career up to this point for Arsenal that should be the last thing on his mind.

“He should be focusing on putting in the kind of shift that can get Arsenal the type of goals and assists they bought him for.

“To see him doing that after talking about getting more game time I think Mikel Arteta should pull him over hot coals, he should be in serious trouble for that. Serious trouble.”

The red card that followed means that Pepe will be out of action for Arsenal’s next games, and Arteta will need to shuffle his pack again as a result to accommodate for the wide man’s absence.

Given how much he has underperformed since his arrival, it’s debatable whether this latest chapter in his Arsenal career could well be the one that will see him sent packing. 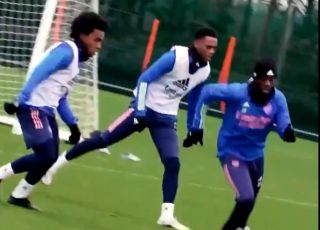