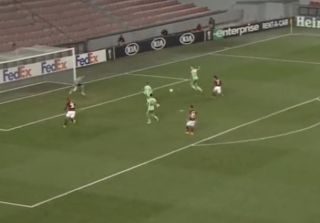 Celtic were an impressive team to watch in Europe least season due to their ability to hit teams on the counter attack, but Fraser Forster was so crucial to the success of that team.

He was dominant and gave the defence confidence with his ability to command the area, so the difference between he and Scott Bain is alarming to see.

Every Celtic player in the penalty area has to take some responsibility here, but Bain’s inability to cut out a ball that comes all the way across his six yard box is poor:

Celtic have been very keen to point out that Neil Lennon’s job isn’t in danger, but something will need to change soon.