Some eagle-eyed Arsenal fans have noticed a strange piece of information that the club have posted on their website ahead of tonight’s Premier League clash against Wolves.

The north London outfit let on that Bernd Leno will actually wear the white away kit designed for the outfielders with an infographic they posted in a preview piece.

This certainly marks a strange decision, which seems to have been made in a bid to avoid a kit clash.

Why Leno is having to make the change isn’t clear as of yet.

The infographic shows that Wolves’ first kit is of course their orange/gold home shirt accompanied by black shorts, which would cause a clash if Leno wore his black strip.

It’s certainly a strange one. Wolves’ speckled blue and white away shirt, which is paired with white shorts would clash with Arsenal’s home strip.

We’re not sure why both sides – who have their kits manufactured by Adidas – can’t have both their keepers wearing their fluorescent green strips, Leno and Rui Patricio are hardly going to be standing next to each other.

Confirmed: Arsenal’s goalkeeper will wear the white away kit against Wolves this evening, known as ‘GK 4’, to avoid a kit clash. #afc pic.twitter.com/5WkAwm6bac

The reason is that all three of our keeper kits are deemed to clash with Wolves’ home shirt. As @afc3m mentioned, it would have made far more sense for Leno to wear our navy third kit. Personally, I feel fluo yellow/green could’ve been worn by Leno https://t.co/C3ZML9cs99 pic.twitter.com/onNCqHfnuv 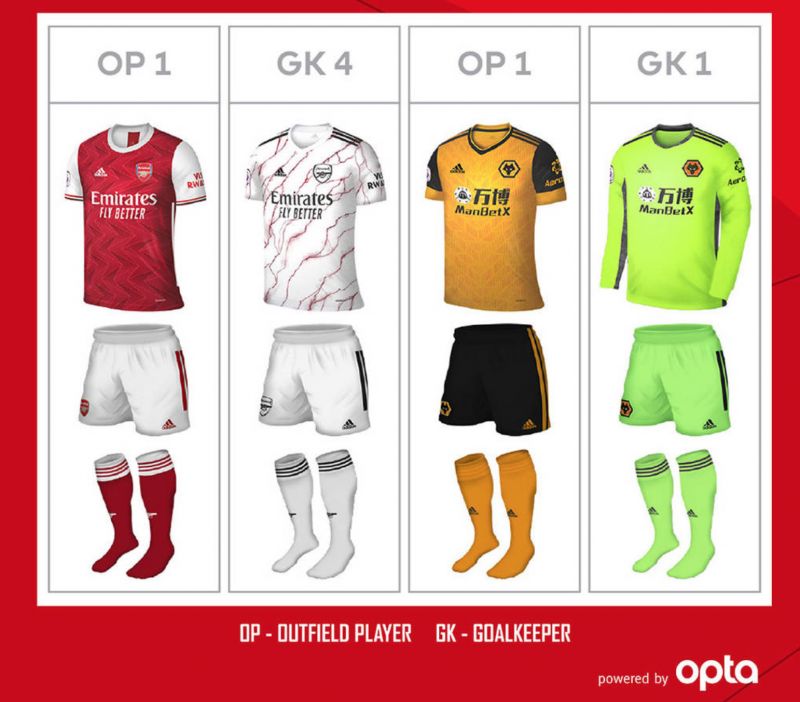 This apparent measure may actually be unnecessary as Wolves have a grey goalkeeper strip as well, why Patricio won’t be sporting that is unclear – perhaps that would be deemed to clash with Arsenal’s white shorts and sleeves.

It will be interesting to see if this would be the first time that a Premier League goalkeeper wears an outfield kit, that seems set unless Arsenal have made a mistake on their site.

Thrills and spills in the top-flight.