According to Spanish publication Sport, Barcelona face a fine of up to €3000 as Lionel Messi’s heartwarming tribute to Diego Maradona conflicts an RFEF rule.

Messi scored the final goal of Barcelona’s 4-0 win against Osasuna on Sunday with a wonderful strike, the all-time great celebrated by taking off his Blaugrana shirt to reveal a Newell’s Old Boys one.

The shirt in question had Maradona’s iconic No.10 on the back. Newell’s are Messi’s boyhood club, Diego played for them before ending his playing career with his beloved Boca Juniors.

Sport cite the text, stating that the Catalan outfit face a fine of up to €3000. Thankfully, the cash-strapped side wouldn’t have to pay this until the end of the season.

It was announced on Friday that the Barcelona first-team players and Ronald Koeman have agreed to a pay cut totalling €122m, as well as a deferred variable figure of €50m, to help the side. 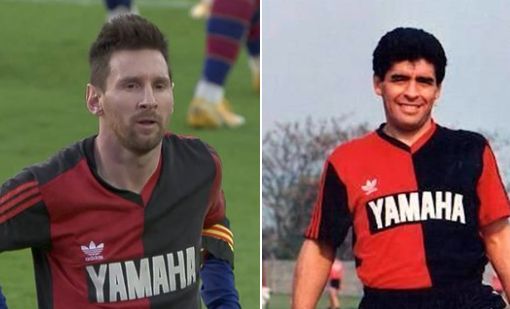 Here’s the RFEF’s rules on the matter:

“The footballer who, on the occasion of having scored a goal or for any other cause derived from the vicissitudes of the game, raises his shirt and displays any kind of advertising, slogan, legend, acronym, anagrams or drawings, Whatever its contents or the purpose of the action, it  will be punished, as the author of a serious offence, with a fine of up to 3,000 euros and a warning.”

Barcelona’s problematic spending – in terms of transfer fees that have proved to be embarrassing and mammoth wages – has caught up with the side since the Covid-19 pandemic struck.

It’s a real shame that such a rule has to be enforced, but in a commercially-driven world it’s unfortunately a necessity.

In this case for example, Yamaha have experienced publicity from one of the biggest current players in the world, despite the fact that they no longer sponsor Newell’s Old Boys.

We’d hope that an exception could be made in these circumstances, but it seems unlikely given similar incidents in world football in the past.