The Mirror’s Chief Football Writer John Cross has weighed in on the Edinson Cavani situation this morning, with Cross expecting the Manchester United striker to be banned for the social media post.

Cavani took to Instagram to celebrate his game-winning contribution off the bench for the Red Devils in Sunday’s 3-2 win against Southampton, which saw the centre-forward bag two goals and an assist.

The Uruguayan, who arrived on a free transfer this summer after a brilliant spell with Paris Saint-Germain, replied to a fan or friend’s congratulatory post with the term ‘Gracias Negrito’.

That literally translates to ‘thanks Black’, leading to Cavani being labelled a racist, whilst also sparking comparisons to when then Liverpool striker Luis Suarez racially abused United’s Patrice Evra.

Cross thinks ‘it’s hard to see anything else but a ban’ for Cavani after this post, adding that it would carry the standard length of three games, rather than the eight Suarez saw for his sickening actions.

Cavani facing FA investigation. His defence will say the word he used was similar but significantly different to Suarez case. Something he says is a term of affection in South America. It’s hard to see anything else but a ban. And a ban would be standard 3 games. https://t.co/xh2O8OOCFE 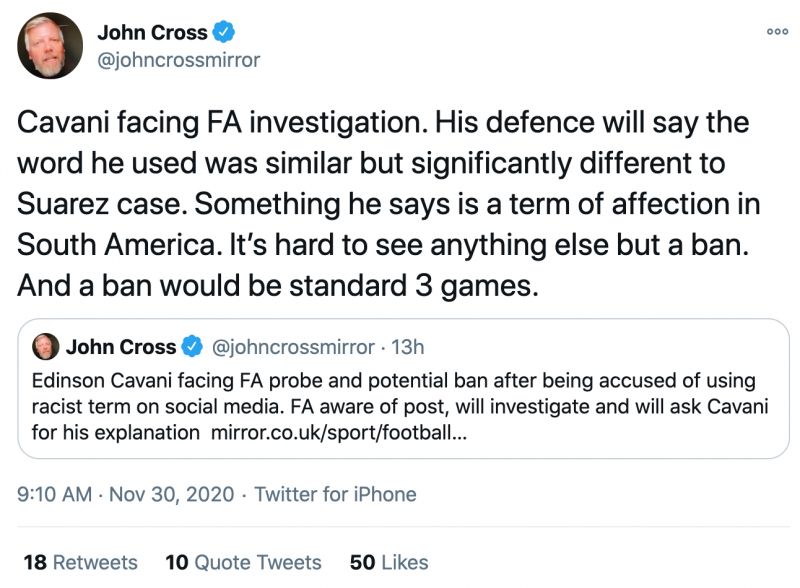 Some reaction from Liverpool supporters can be found in our piece from last night, whilst we’ve also referenced how ‘Negrito’ is often used in Spanish-speaking areas of Latin America.