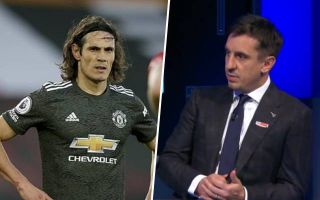 Manchester United legend Gary Neville has given an impassioned speech on racism in the English game in wake of Edinson Cavani’s controversial Instagram story.

As reported by the BBC, Cavani, in wake of his match-winning brace against Southampton, used a word in an Instagram story which can be viewed as racially offensive in some cultures – including England.

While it did not appear to be ill-intentioned, Cavani clearly had no idea that the word would be considered racially inconsiderate in England. That’s exactly Gary Neville’s gripe, as he explained on MNF this evening.

Watch Neville’s full, detailed and impassioned speech on how the English game needs to improve in terms of the education provided to those involved in it, with pictures courtesy of Sky Sports.

? “It will continue to happen until there is education put in to place”@GNev2 thinks Edinson Cavani’s Instagram post incident could’ve easily been avoided pic.twitter.com/3uqebYcSHe

Neville is absolutely right. While it is Cavani’s responsibility to build his cultural awareness while living in England and playing for a club of United’s stature, it’s remarkable that there’s nothing in place to teach footballers moving from other countries about the right and wrong on these shores.