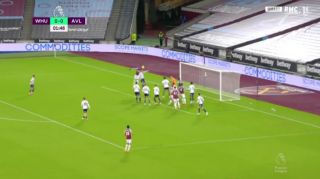 West Ham got off to a great start at the London Stadium in Monday night’s match against Aston Villa.

The Midlanders hadn’t conceded an away goal since they’d played against the Hammers on the final day of last season.

This match was barely two minutes old before Angelo Ogbonna rose highest to connect with a cross and head home.

If David Moyes’ side are able to earn the three points, they’ll end the weekend in fifth and just four points behind leaders Tottenham.