The Real Madrid players paid tribute to the late Diego Maradona during their 2-0 defeat to Shakhtar Donetsk this evening – albeit, accidentally.

Before we get into the meat of this article, which is essentially a joke, it’s important to continue to pay our respects for Diego Maradona. A true great of the game, whose passing is an immeasurable loss to the game.

MORE: “Zidane has to go” – These Real Madrid fans react as loss to Shakhtar means Champions League qualification is in serious danger

Despite the Argentine being ex-Barcelona, Real Madrid’s squad were clearly appreciative of his contributions to the game, orchestrating a tribute of their own during today’s 2-0 loss to Shakhtar.

We’re not entirely sure what Real Madrid’s players were doing in the middle of the park there, but you won’t be surprised to hear that this attack resulted in a goal.

While there’s striking resemblance between the two images, Maradona was arguably the greatest ever to play the game, and this is one of the worst Real Madrid teams we’ve see in a very long time.

There really is no comparison. 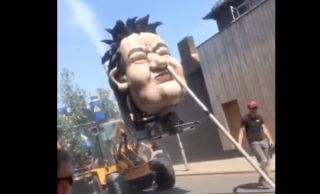