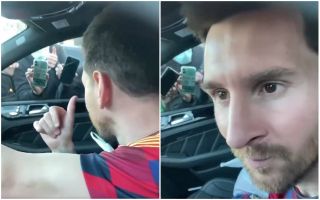 A clip has been shared on social media that offers what the normal things in everyday life are from Lionel Messi’s point of view, with the superstar’s car completely surrounded by fans after Barcelona training.

The 33-year-old looks like he’s become all to accustomed to this kind of moment as he sat with a largely straight-faced expression, whilst his supporters had the chance to take pictures and videos.

Messi showed his class as he waved at the faithful, stuck a thumbs up and winked before he finally drove off home.

Imagine running into Messi on the street ?

It’s crazy to see that this is what Messi has to endure after an average day of work, he’s a great sport for giving fans their special moment out of his own time.

Messi can somewhat relax until the weekend as he’s been handed another rest ahead of Barcelona’s Champions League tie against Ferencvaros tomorrow night.