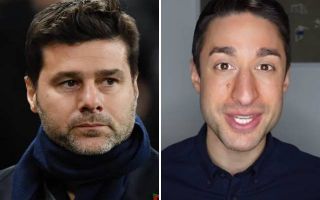 During David Ornstein’s latest YouTube Q&A for The Athletic, he suggested that Mauricio Pochettino has one eye on developments at Chelsea.

Pochettino has been out of work ever since his dismissal from Tottenham Hotspur, which is surprising, with the Argentine being considered as one of the finest managers on the planet during his time in North London.

Plenty of job vacancies have appeared and disappeared, with Pochettino still being sat with his feet up in front of the TV – and his successor Jose Mourinho sat top of the Premier League.

While Pochettino has been out of the Premier League picture for over a year now, David Ornstein believes that he keeps a close eye on the league, and notably, on Chelsea.

Ornstein, speaking on The Athletic YouTube channel, suggested that Pochettino watches developments at Chelsea, a club who tend to have a revolving door of managers in and out.

Frank Lampard, though, is flying with the Blues at current. The club’s all-time top scorer is well on his way to proving to be a success story of a manager. He won’t be going anywhere anytime soon.