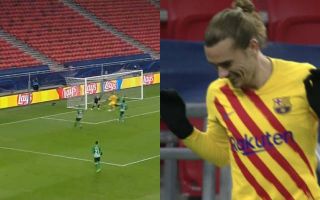 Griezmann endured a difficult start to life under Ronald Koeman, while he didn’t exactly set the world alight during his debut campaign at the Nou Camp.

With the European Championships scheduled to take place next summer, Didier Deschamps will no doubt have been hoping that he would find his stride sooner rather than later.

Thankfully for all involved, he has.

With a goal against Ferencvaros in the Champions League tonight, Griezmann made it three goals in three games, the first time he’s ever done that in a Barcelona shirt.

What a smart finish it was, too. A brilliant run to the near post before flicking the ball into the back of the net with his heel.

This is vintage Antoine Griezmann, something we have not seen for some time, and that Barcelona fans have been longing for.

What a beautiful team goal finished it off by Griezmann??? pic.twitter.com/oaXFGVrBYP