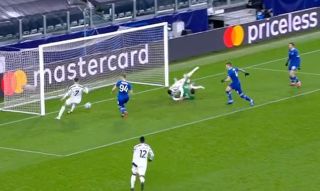 Cristiano Ronaldo has scored some outstanding goals in his career so far, but you have to think that any of us would manage to put this one away.

To be fair to the great man if you watch his movement it’s a masterclass in timing his run and anticipating where the ball is going to go, but this probably goes in without his intervention on the line:

It was always obvious that Juve and Barcelona would be the ones to advance from this group, but a win here for the Italians at least takes it down to the final game to see who will top the group.

This goal also marks Ronaldo’s 750th in all competitions, but it could be the easiest one yet:

750 – Cristiano Ronaldo scored his 750th goal among clubs and senior National team, with 10% of these being scored for Juventus. Limitless.#JuveDynamo #UCL pic.twitter.com/Mmm4Xov19x