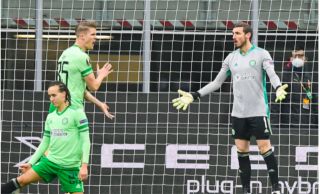 It was clear in the summer that not re-signing Fraser Forster was going to be a blow for Celtic, but it’s actually become a full-blown calamity.

Scott Bain was never anything more than a decent keeper in a struggling side when he played for Dundee, so it’s not great surprise that he’s failed to mature into a top class option.

The biggest problem was the decision to go out and sign Vasilis Barkas as the man to take over from Forster, because his history suggested that he was a risky signing.

It wasn’t that he had looked like a poor player for AEK, it was more that he’s a 26 year old keeper who had only played 80 league games before moving to Glasgow, so there was no telling how he would react to the step up in quality and pressure.

The real problem with the Greek keeper is that he just seems incapable of actually stopping any shots, so you fear the worst any time the opposition get within shooting range.

He’s not the only problem in this Celtic team, but plenty of the fans are fed up after seeing him in the loss to AC Milan tonight:

Barkas is one of the worst goalkeepers in our history, get him punted rapid

Barkas wouldn’t look out of place in the Lisburn league

I think if I had a big pair of gloves I could challenge Barkas for the Celtic goalkeepers position. I am in my 50’s.

Genuine question, can anyone remember Barkas ever making a save?