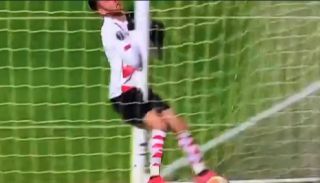 It’s often said that football at the highest level will come down to which players are willing to make the biggest sacrifices to win the game, but this is some next level stuff from Duje Cop.

He’s fully aware that he’s got an excellent chance to score against Rangers here, but he will need to allow some of his more delicate body parts to collide with force against the goalpost:

He also CLATTERED off the post while doing so. ?#UEL | #VMSport pic.twitter.com/B1MJbr8cPW

It probably wasn’t even worth it because Rangers went straight up the other end and got a penalty to equalise, while you can see from the player’s reaction that this was a sore one.