Jurgen Klopp has been extremely vocal with his concerns over fixture congestion, and the rest, but looking at this graph by the Independent, he ought to keep his mouth shut.

As reported by the BBC, Klopp used his pre-match press conference on Friday as a platform to reiterate his concerns about the absence of the five-substitute rule in the Premier League. He implied that those pulling the strings have no regard for player welfare.

That’s despite, just a week ago, him saying that he will stop moaning about fixture congestion and scheduling as he realises it won’t make a difference, as the Daily Mail reported.

While he may have a point, if the German doesn’t stop saying the same thing over and over again, people are going to begin to grow tired. Already, his plea is beginning to fall on deaf ears.

Especially when the Independent have compared Liverpool’s average rest days between matches over the busy festive period to their Premier League rivals – and they on average have over half than Everton and the Manchester pair. 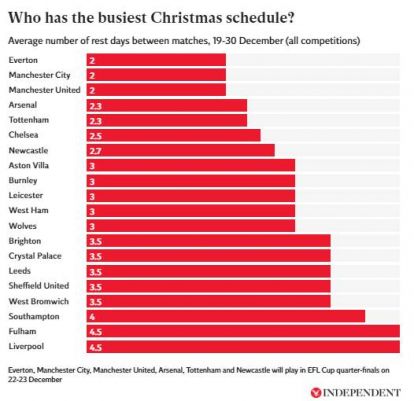 Liverpool have been incredibly unfortunate on the injury front this season, and for that reason we have to sympathise with Klopp, but if he’s expecting an elaborate performance on the violin, he’s not going to get one from us.

Fulham are the only team blessed with a rest days as favourable as the Premier League champions over what is the most congested period of the season. What is he complaining about?