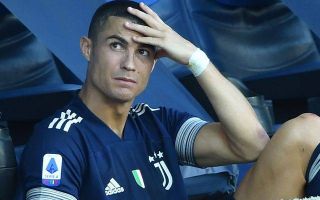 Although he’s yet to win the Champions League with Juventus, it hasn’t been for the want of trying for Cristiano Ronaldo.

The bianconeri have continued to dominate in Serie A but the addition of the Portuguese was likely made in the hope that he would deliver the premier European trophy during his tenure at the club.

The coronavirus pandemic has decimated football clubs everywhere in an economic sense, and that could mean that Ronaldo has to depart Turin sooner than perhaps he, or Juventus would like.

However, should he stay around, Antonio Di Natale has suggested Ronaldo will go on scoring until he’s at least 40.

”In Italy, he’s [Ronaldo] confirming what he did at Real Madrid and in the Premier League and everywhere he has been,” Di Natale said to MARCA, cited by the Daily Express.

“He trains hard, he improves and he makes the difference.”Even when he is 40 years of age he’ll continue to score so many goals.”

With the striker seemingly taking his fitness extremely seriously, it really wouldn’t be a surprise to see him carry on for a few more years yet.

The only question is whether that will be at Juventus or elsewhere.