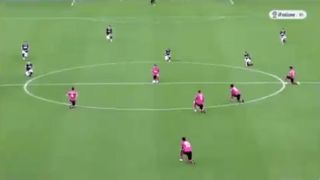 Saturday saw football supporters back in stadiums for the first time in almost nine months, and for virtually every ground around the country there were no problems to report.

As expected, the lucky 2,000 that were allowed in were grateful that things were seemingly getting back to normal.

However, over at The Den, Millwall’s loyal band of followers took it upon themselves to make it a day to remember for a whole other reason, and a disgusting one at that.

Once the referee blew the whistle but before the teams kicked off, both Millwall and opponents, Derby County, took the knee in support of the Black Lives Matter movement, an act that’s been repeated countrywide for the last few weeks.

At this point, the Millwall fans loudly booed their team, making their feelings abundantly clear.

The Football Association released a statement in response.

“The FA supports all players and staff that wish to take a stand against discrimination in a respectful manner, which includes taking of the knee, and strongly condemns the behaviours of any spectators that actively voice their opposition to such activities.,” it read, cited by the Daily Star.

Kick it Out, the organisation tasked with educating those within the game on certain issues, also issued a statement of their own.

Our response to today’s incident at Millwall. pic.twitter.com/129BS270N0

Let’s hope that today’s incident is a one off and is never heard again in an English football ground.