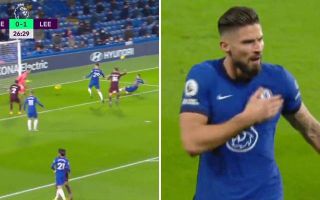 Olivier Giroud has done it again. Just when Chelsea needed him, the Frenchman popped up with a goal against Leeds United.

Giroud has found opportunities in the starting eleven hard to come by this term, despite scoring some crucial goals after the Premier League resumed post-lockdown.

Frank Lampard has been keen to look to the future, but Giroud’s four goals against Sevilla midweek suggested that looking backwards is not always a bad idea.

Giroud was included in the starting eleven to feature against Leeds United this evening, as you may expect to after bagging four goals, and that decision has been justified.

You can say what you like about Giroud, but he scores goals, and important ones too.

How many times have we seen him making this kind of run towards the near post and finding a finish in this manner? He’s one of the finest centre-forwards the Premier League has seen this decade – and that’s just facts.