Manchester United’s on-loan midfielder, Andreas Pereira, managed to get his first full 90-minutes for new side Lazio under his belt during Saturday’s Serie A match against Spezia.

Pereira, 24, first joined United’s youth academy from PSV all the way back in 2012 in a transfer which cost the Red Devils just £135,000, as per Transfermarkt.

Having previously enjoyed loan spells with the likes of Granada and Valencia, the Brazilian midfielder returned to his parent club in 2018 in an attempt to fight for a first-team place.

After featuring in a total of 78 matches in all competitions for United’s senior first-team, Pereira has always struggled to impress which is highlighted by the attacking midfielder managing just nine direct goal contributions.

Eventually being frozen out of manager Ole Gunnar Solskjaer’s plans, in a desperate attempt to reignite his career, the 24-year-old joined Lazio on loan during the summer transfer window.

Since his arrival in Italy earlier this year, Pereira has featured in nine matches in all competitions, however, Saturday’s game against Spezia saw the South American complete his first full match.

Pereira’s decent performance almost saw the 24-year-old get among the goals himself, however, a VAR review saw the United midfielder’s effort eventually ruled out for an infringement.

Speaking after Saturday’s match, as quoted by CalcioNews24, Pereira said: “I am very happy to play my first full 90 minutes.

“I really wanted the goal to be validated, but the most important 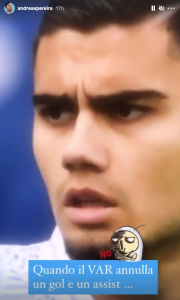 thing is the victory.

“Now let’s think about the next battle and know that we will give our lives for the first knockout round of the Champions League!”