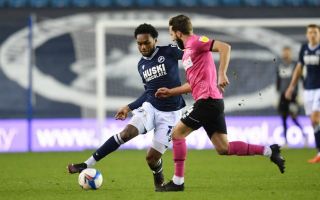 Millwall star Mahlon Romeo has issued a powerful response to the ugly scenes yesterday as the club’s fans booed the players for taking the knee ahead of their Championship clash with Derby County.

It has become customary since football returned in the summer for players to take a knee before kick-off, in solidarity with the Black Lives Matter movement that has attracted particular attention this year following the death of George Floyd at the hands of police back in May.

Some have hit back at the movement and the gesture of taking a knee, and Millwall fans were not the only one to boo their players yesterday as spectators returned to stadiums for the first time since March.

It was certainly disappointing to see some fans booing the gestures of an anti-racism movement, and it provides us with a stark reminder of the work that needs to be done to kick racism out of the sport, and indeed in society as a whole.

Romeo did not hold back in hitting back at Millwall fans over this, saying, as quoted by London News Online: “Today’s game, to me now, has become irrelevant. The fans have been let back in – which the whole team was looking forward to. But in society there is a problem – and that problem is racism.

“The fans who have been let in today have personally disrespected not just me but the football club. And what the football club and the community stand for. What they’ve done is booed and condemned a peaceful gesture which was put in place to highlight, combat and stop any discriminatory behaviour and racism. That’s it – that’s all that gesture is.

“And the fans have chosen to boo that, which for the life of me I can’t understand. It has offended me and everyone who works for this club – the players and the staff.

“I’m speaking on behalf of myself here – not any of the other players – I want to make that very clear. This is the first time I feel disrespected. Because you have booed and condemned a peaceful gesture which – and it needs repeating – was put in place to highlight, combat and tackle any discriminatory behaviour and racism in general.

“I’m almost lost for words. I don’t know how they thought that would make me feel. I don’t know what they thought taking a knee stood for. But I think I’ve explained it simply enough. I feel really low – probably the lowest I’ve felt in my time at this club.

“It’s something I can’t wrap my head around. People will have their beliefs and views, which everyone is entitled too. I’m not trying to stop or contain – but if your beliefs and views oppose a positive change in society then don’t come to a football ground and spread them around.

“If it’s negative, don’t think you can come to a football ground and this is the place where you can spread hatred essentially.”